HOWARD ARNETT, ESQ. TO BE HONORED BY THE MUSEUM AT WARM SPRINGS 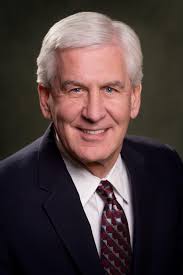 BEND, OR (August 13, 2019) — Karnopp Petersen LLP is pleased to announce Howard Arnett, Esquire will be honored by The Museum at Warm Springs at its annual Huckleberry Harvest and Honor Dinner, taking place this year on August 17th at the High Desert Museum in Bend.

Arnett will receive the museum’s prestigious Twanat Award for his nearly four decades as an attorney for The Confederated Tribes of the Warm Springs Reservation of Oregon, as well as representing other tribes on matters involving treaty rights, tribal sovereignty, Indian Law development, government-to-government relations, and gaming. He is also a longtime supporter of the museum.

The word “Twanat” originates from the Ichishkiin Language of the Warm Springs Tribe meaning “following the traditions of our ancestors”.

Arnett joins a distinguished list of prior Twanat Award honorees including The Honorable Owen Panner, a founding partner of Karnopp Petersen who received the Award in 2005; Two former Governors of Oregon, Victor Atiyeh and Ted Kulongoski; and former U.S. Senators Daniel Inouye and Gordon H. Smith, to name a few.

Karnopp Petersen has represented The Confederated Tribes of the Warm Springs Reservation of Oregon since 1955 and has been recognized by the museum in prior years for the firm’s commitment to Indian Law.  The late James D. Noteboom and Dennis Karnopp received the museum’s Lifetime Achievement Award in 2010 and 2014 respectively, for their longstanding practice in the area of Indian Law.

Arnett’s contributions extend beyond his practice of Indian Law, as an adjunct professor at the University of Oregon School of Law where he teaches courses on American Indian Law as well as advanced seminars on Contemporary Issues in American Indian Law and Comparative Law of Indigenous Peoples. Previously, he was an adjunct professor at the Lewis & Clark Law School teaching the survey course and an advanced seminar on Federal Indian Law.

For more information about The Museum at Warm Springs and the Huckleberry Harvest and Honor Dinner visit www.museumatwarmsprings.org; or contact Debbie Stacona at the museum at (541) 553-3331; or email  [email protected].